THE ECCENTRIC GENIUS OF CHESS 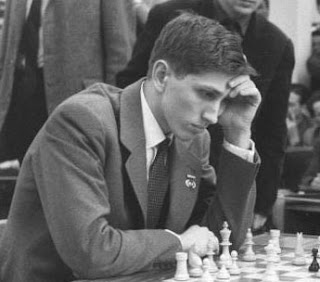 Robert James "Bobby" Fischer
(March 9, 1943 – January 17, 2008)
He was an American chess Grandmaster and the 11th World Chess Champion. Fischer is widely considered one of the greatest chess players of all time. In 1972, with a Cold War type set-up, Fischer captured the World Championship defeating Boris Spassky of the USSR in a match held in Reykjavík, Iceland, that was widely publicized as a Cold War confrontation. Unfortunately, in 1975, Fischer forfeited his title over disagreements with FIDE over the terms of the match.
At 15½ years old, he became both the youngest grandmaster and the youngest candidate for the World Championship up until that time. In the early 1970s he became the most dominant player in modern history—winning the 1970 Interzonal by a record 3½-point margin and winning 20 consecutive games, including two unprecedented 6–0 sweeps in the Candidates Matches leading to the World Championship with Spassky.
In 1992, after 20 years of seclusion he returned back to competitive and won an unofficial rematch against Spassky. The competition was held in Yugoslavia, which was then under a United Nations embargo. After ending his competitive career, he proposed a new variant of chess (Chess960) and a modified chess timing system by imposing an idea of adding a time increment after each move is now standard.

It was a lucky 13 for Fischer as he won a rarely used Alekhine defence in a very enterprising game on the 13th game of the 1973 World Chess Championship. (Note: Houdini 1.5 evaluates the moves for us)

Books written with Fischer as Subject:

The Week in Chess